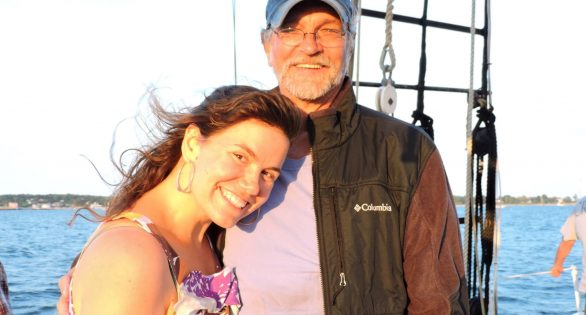 For centuries fishermen and sailors have gathered to sing. Whether to keep a rhythm for shipboard tasks or to express emotions of a seafarer away from home, music has been central to life at sea.

Member Peter Souza and his talented wife Audi are leaders in Adventure’s ranks. Their young daughter Zinnia pitches in as well! Recently they have been weathering the same challenges many of us have encountered, and have relied on music to carry them through.

Below Peter and Audi share several of their favorite songs. What started as a short list has turned into a Youtube channel with new songs being added almost daily! Zinnia even joins in on a few numbers. Where do these songs take you and your family members? Give a listen and let Audi, Peter and Zinnia take you sailing. Click here for all of Audi and Peter’s music videos

We asked our community to send in their favorite songs and we got some great submissions. The Souzas responded by adding performances of these classics to their repertoire; enjoy! Click on the song titles to listen.

Board member Bill Barton shares the connection he found with some of these songs during his extensive voyaging at sea:

Blackbird –“ I remember sailing in the turquoise Caribbean in 1974 and stopping at Bequia. At the top of the beach was an old whaleboat with pairs of oars and a place in the bow for a harpooner. The song Blackbird originated here to keep a rowing rhythm during the traditional whale hunt. Young Zinnia Souza joins her parents in a family rendition of the song.”

Yea Ho, Little Fish – “This Portuguese lullaby makes me remember the first time I heard it when watching the 1937 film of Rudyard Kipling’s Captains Courageous. The older, wiser fisherman, Manuel, sings the song to the lad Harvey, as if offering advice on life. Hear Manuel’s versions here and here.”

Newfoundland Bound – “This is a Peter Souza solo, and written by him about his family trip to Newfoundland by ferry to visit friends and relations. It takes me back to Newfoundland and the warmth of the people in the island’s fishing outports I first visited in 1977 aboard the 1908 barkentine Regina Maris.”

One More Day – “A classic theme in sea chanteys is the yearning to be back home; some sailors used to call it “channel fever” as the ache grew stronger the closer to home, peaking in the harbor’s channel. Peter and Audi take me to times I have returned to Cape Ann waters from far away, sometimes homeward bound from Nova Scotia or out of the Atlantic past Georges Bank, over Nantucket shoals and around Cape Cod.”

Many of you know the Souzas from their performances with Three Sheets to the Wind . Did you know there’s a virtual chantey sing each Monday night in Gloucester? Email us for details and join in. Info@schooner-adventure.org