January 14, 1700 – William Stevens and Ensign Joseph Allen signed a deed with Samuel English, grandson of Mascanomet, granting the tract of land known as the township of “Glosster” for the amount of seven pounds.

1776–1782 — During Revolutionary War, Grand Bankers were left at wharves and only Chebacco Boats were used close to shore.

1790–1863 — Gloucester was a busy port receiving and sending ships (barques and brigs) worldwide for trade, most notably the Dutch Guiana, or Surinam 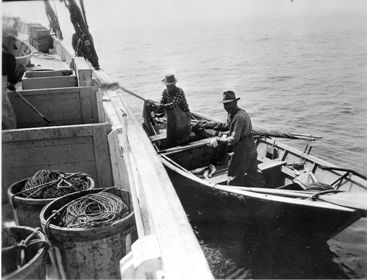