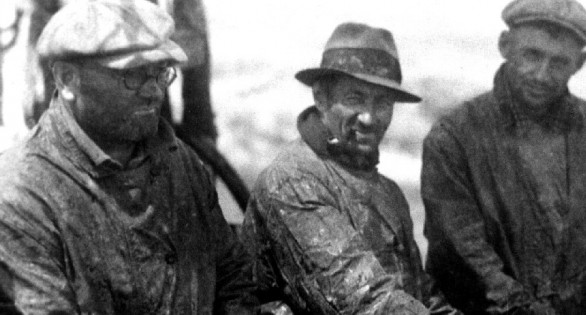 On March 31, 2014, The Gloucester Adventure Inc. was notified that it had been selected to receive an Essex Heritage Partnership Grant for the design and implementation of an exhibit for the Adventure Learning Center titled “Men of Adventure”. Executive Director John Fuller came up with this idea and submitted the grant application. The images for the exhibit will come primarily from Adventure’s photo archives which include numerous John Clayton negatives taken of the men during his several trips with the men in the early fifties—not long before Adventure was retired from active fishing service.

With the organization in the final stages of restoring Schooner Adventure, it is time to start looking forward to a time when Adventure will be used as an educational resource and students of all ages will be below decks in the Learning Center. It is here they will be confronted with the iconic images of the men who fished from dories out on the Banks. Captains Jeff Thomas and Leo Hynes, engineer Fred Thomas, cook Paddy Nolan, ‘Big Mac’, Frank Mayo, Jake Flores… all men loyal to Adventure and her captains and the souls that made Adventure who she was. Hopefully relatives and friends of the families of these men will come aboard and see what being on Adventure meant to these men.